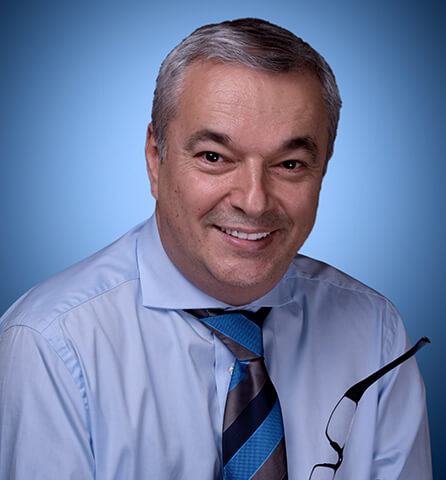 Prof. Sleiman received his DDS in 1990, his DUA in 1995, and his PhD in 2006 at the Lebanese University School of Dentistry. He also received his CESE in Endodontics at St-Joseph University in 1999. He lectures internationally and has served as head of the Endodontic Department at the Lebanese University Dental School until 2003, where he is currently Assistant Professor. One of his many honors and awards is the Qana scientific award of the Lebanese Dental Association. Dr. Sleiman is also holds fellowships in the ICD and the AAE. He maintains practices in Beirut, Lebanon and Dubai, UAE.

As a respected instructor, Dr. Sleiman teaches at the Lebanese University and University of North Carolina (USA). He achieved fellowship with the International College of Dentists and the American Association of Endodontists. Dr. Sleiman’s influence spans the globe. Internationally, many industry publications have featured Dr. Sleiman’s written works, and he lectures to dental professionals at home and abroad. The Hu-Friedy company produces a line of dental instruments that Dr. Sleiman designed, and the doctor has had a role in developing several significant projects. In addition, Dr. Sleiman maintains private practices in Beirut, Lebanon, Dubai, UAE; and Oman.

Dr. Sleiman is the former Acting Head of the Endo Department at the Lebanese University. He is responsible for the Prodent Endo training center in Beirut is an international speaker in endodontics, collaborates in several undergoing research endodontic studies, and has a private practice limited to endodontics.